By Gene Stevens I first saw 13 Ghosts at the Harlem-Irving  Drive-In in Chicago when I was about five years old. The movie scared the pants OFF of me! And […]

I first saw 13 Ghosts at the Harlem-Irving  Drive-In in Chicago when I was about five years old. The movie scared the pants OFF of me! And what the HELL was with my family for taking me to see such a scary movie at night time? Then again, my older brothers would frequently terrorize me by doing things like wearing horrible rubber monster masks, locking me in dark closets, telling me that the devil would bite my toes if I got out of bed one more time, and they even locked me in the trunk of my Dad’s old car while playing Al Capone. And yes dear brother.. If you read this article.. I haven’t forgotten. But it’s okay, it made me stronger and gave me a really cool sick and macabre sense of humor, which I’ve used at many funerals over the years. Almost got me lynched one time. But I digress.

Thirteen Ghosts, was in my opinion, both a brilliantly produced and marketed horror movie, which mixed animation in the film process to produce a realistic land of ghosts. 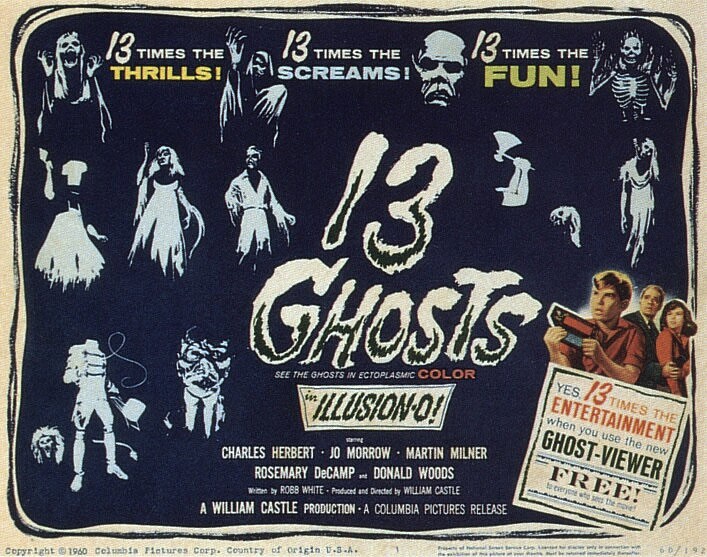 The movie plot revolves around Dr. Plato Zorba, who is apparently an eccentric scientist who dabbles in the occult. He goes around the world collecting ghosts and bringing them back to his creepy mansion. The mansion is where he and his spooky housekeeper live with the mischievous spirits.  As the story goes, Dr. Zorba not only developed a way to catch ghosts but, a way to see them as well, by the use of a special pair of goggles. 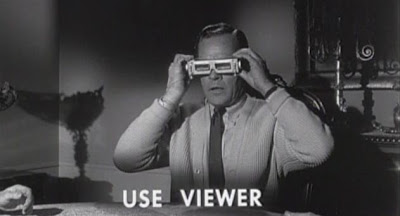 The cool part of the ghost goggles was that the audience got a pair too. The movie producer was a guy by the name of William Castle. Who was a great showman in the tradition of PT Barnum. 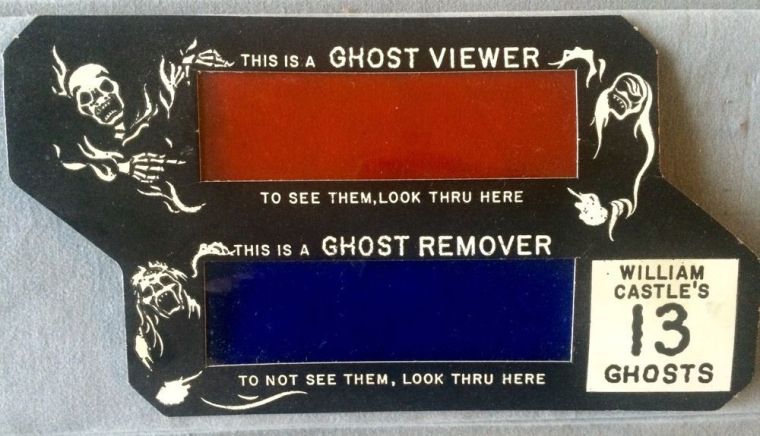 You could see the ghosts if you wore the magic goggles!

The plot unfolds when Cyrus Zorba (played by Donald Woods) who is financially challenged, inherits the old mansion packed full if ghosts (and treasure). At first they can’t believe their good luck. Though, it is not long after they move in, that they realize their mistake. And that the house is haunted by 12 ghosts (because the thirteenth is still pending) and run by one really creepy housekeeper (Margaret Hamilton) who dabbles in the dark arts. Though the ghosts are intent on killing a member of the family, the Zorbas insist on staying in the house because they have learned that a large fortune is hidden somewhere inside it. A large amount of money also sought by a young lawyer played by Martin Milner, best known for his role on the T.V. series Adam-12. The young lawyer soon finds himself on the wrong side of the ghosts, including old doc Zorba who is now a ghost in the house and out to get revenge against the young lawyer who tried to rip him off. Does anyone get out alive?? Do they find the treasure?? You’ll have to see it to believe it.