Skip to content
What’s it All About Monster Kid?
Uncategorized

What’s it All About Monster Kid?

By Editor Gene Stevens Monsters After Midnight When I was growing up in Chicago, sometime around 1972 my best monster kid friend was Eddie. I wish I could remember Eddie’s […] 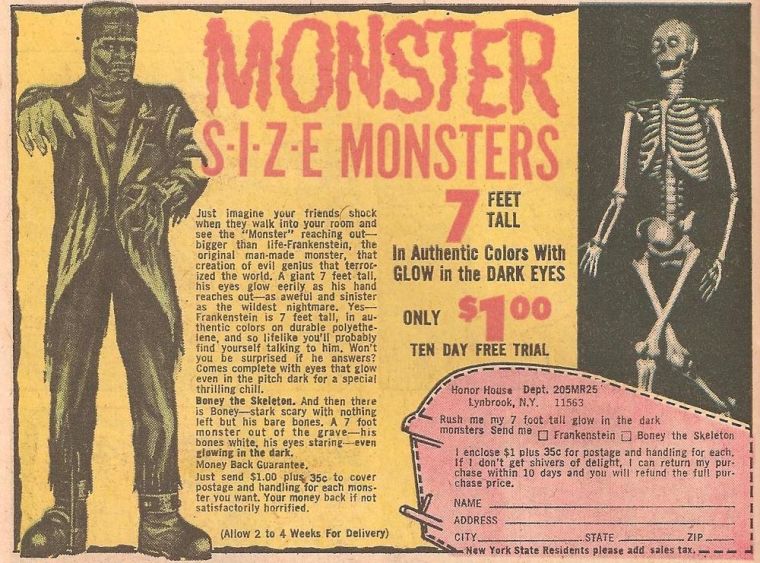 When I was growing up in Chicago, sometime around 1972 my best monster kid friend was Eddie. I wish I could remember Eddie’s last name. But I’m sixty years old now and it’s been an awful long time. Though I remember quite a bit about where we lived and about Eddie and his family. We lived in an apartment building on Addison Ave near Pulaski Ave in the city. I went to school and had a paper route there.  Eddie and his sister Linda had great parents. They were a wonderful family and always welcomed me into their warm home. Eddie was huge monster fan and we both read comic books,  Eerie Magazine and built Aurora monster models.

I was there shortly after he and his mom put it up. Eddie said something like “God damn thing is a just a plastic picture”. Then we both stood there for a few short moments and I looked at Eddie and said.. “Yea but it’s still cool”. Eddie looked back at me an smiled his big grin and said “Yea it is”. After all, Eddie had something that no other kid in the neighborhood had. He had a seven foot Frankenstein’s monster in his bedroom. The rest of us only had envy for Eddie’s mail order monster.

Every time I write an article about classic monsters, I think about Eddie and our days as monster kids. Those days were pretty simple and we looked for hero’s in many places. And the classic monster genre was a family and kid friendly place to let our imaginations run wild.

Today’s movies can convey a lot of different messages. And the nature of modern horror is deep with shock value that the older movies were not allowed to use. But they turned out pretty good despite having to work within a set of guidelines. The older movies also expressed the thoughts and culture of the time in which they were produced.

Monsters After Midnight began six years ago as an actual magazine and eventually morphed into this blog page. I decided to do this, because producing a magazine was extremely time consuming and expensive. And I realized that there was a bigger classic monster mag growing in my own back yard, and that was Scary Monsters Magazine. I became a reader and a contributor to Scary Monsters not to mention that I am also a big fan.  And after a complicated divorce and major life changes I decided to bring back Monsters After Midnight as a simple blog. At the beginning of this year, I decided to really expand the blog and its gone from just a handful of visitors every year to over a thousand hits a month.

But in today’s world of social media and fast paced news. Some blog posts can be misunderstood. And that’s understandable, as things are being looked at a lot differently now. More than ever before, criticism moves at the speed of light. So I thought it was time to qualify what we do here at Monsters After Midnight, and who our audience is. And that idea is just as simple as the day that Eddie and I stood in front of that big monster picture and became monster kids. We are the monster kids who watched Svengoolie, Creature Features, and Dark Shadows. We grew up to adults who laughed with Mystery Science Theater and still watch Svengoolie on METV. That’s who I write for and that’s what this blog is all about.