There are certain movies that stand out in the Sci-Fi genre. My favorite Sci-Fi movie is the 1953 version of HG Wells “War of The Worlds”. It became a highly […]

There are certain movies that stand out in the Sci-Fi genre. My favorite Sci-Fi movie is the 1953 version of HG Wells “War of The Worlds”. It became a highly acclaimed movie because of the technical work that was put into its production. There are few movies that rise to the level of War of The Worlds, but one overlooked movie comes in a tight second, and that film is Robin Crusoe on Mars which came out in 1963. 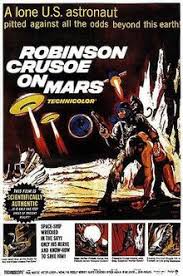 By 1963, the mercury space space program was well under way and space race between United States and the former Soviet Union was challenging film makers to reach to the stars for fresh perspectives on movies about space exploration. The public was spellbound by the space program and every Mercury launch was treated like a national happening on TV.  Young people everywhere were moonstruck and space toys and space movies dominated the big screen. Names like John Glen, Alan Shepard, and Gordon Cooper, men who were part of the original Mercury team became legends. Men who rode rockets to space. An endeavor which would eventually take the first men to the moon.

The planet Mars has captured the imagination of people for centuries. The angry red planet was always the favorite subject of astronomers and sci-fi Writers. Mars became a very controversial subject in the 1930’s when the famed actor Orson Welles  broadcast a radio recreation of HG Wells “The War of the Worlds” . The famed and infamous radio show was done in a very realistic and documentary style. It was transmitted via radio which was still a new communications medium during this time period.  Welle’s broadcast recreation of HG Wells work  frightened and stunned people across the nation. Never before had people contemplated an invasion by an extraterrestrial force. It brought the Planet Mars  and all of its mystique and mysteries into the front rooms of every home in America.

In 1964 the movie Robinson Crusoe on Mars was released.  The movie is space age adaption of Daniel Defoe’s classic tale of a sailor stranded on a deserted island. In this version,  Crusoe (Cmdr. Christopher ‘Kit’ Draper actor Paul Mantee)  is an astronaut who is part of a team of two astronauts and a space astronaut monkey named Mona circling Mars (the other is Col. Dan McReady played actor Adam West, who is best remembered as the Batman from the 1960’s TV series.) who after a mishap crash-lands on the seemingly-abandoned planet of Mars.

After many days of struggling to understand his environment, and trying to stay alive. He detects that isn’t alone of the planet Mars. Soon, he meets Friday (actor Victor Lundin), who is an alien slave who recently escaped from his captors who appear to be using slave labor to mine the angry red planet. Kit Draper helps Friday to escape his captors. The movie then embarks on sending a great message, as both of these men struggle together to fight the aliens who are searching for Friday. And also fighting Mars physical elements. It shows two very different people cooperating together to survive the odds.

The movie is shot beautifully in technicolor and the special effects are ground breaking.  The producers having very little knowledge of the surface and environment of Mars took a huge amount of creative license. They depicted Mars as both forbidding and survivable. A place that had water, minimum vegetation and very thin air.  But science and a partnership with between two beings creates a level playing ground and both men in this movie overcome Mars harsh environment to survive. The special effects include a meteor strike of the planet which nearly kills Crusoe and Friday in a spectacular landscape with raining debris.